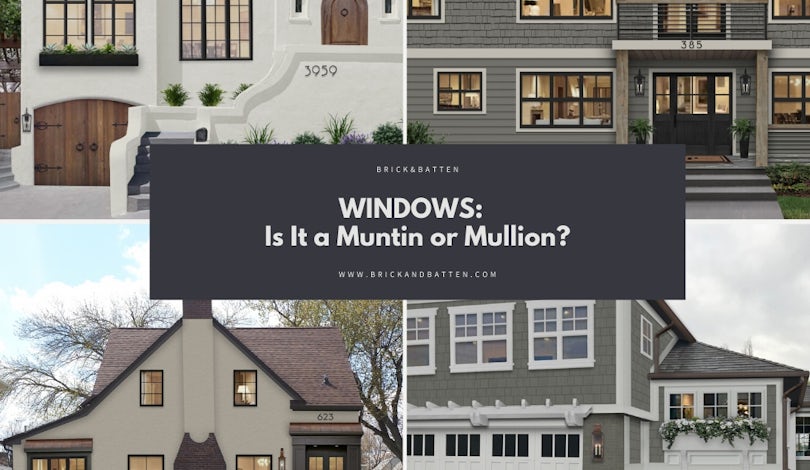 Muntin and mullion–No they aren’t culinary or even scientific terms. They are architectural jargon, and as a homeowner, it’s important to understand the differences between muntin vs. mullion, especially if you’re tackling an exterior redesign project. Both of these exterior elements part of window and door systems, but they are quite different from one another, and knowing which one is which can make a big difference when you hit that purchase button in your online shopping cart. We’re here to help make sure that you purchase the right product for your windows.

If you need help envisioning muntins or mullions on your home, brick&batten can help. But until then, stay with us to learn more about the differences between these two terms that sometimes confuse even the most talented architects.

Like a tick-tack-toe grid separates playing spaces, muntins separate panes of glass in true divided light windows. Muntins are traditionally made out of wood, but some are made out of steel.

Some window grills are imitation muntins, meaning they appear to look like muntins, but they don’t truly separate individual panes of glass. Instead, they attach to one large piece of glass. This often appears on newer homes, as it provides the same beauty of muntins without the risk of causing as much draft. However, large pieces of glass can be tricky to install and transport to the site without breaking, making muntins the more convenient choice for builders. Muntins also provide a sense of coziness to a home, as large, muntin-less window panes are often reserved for store display windows and offices.

However, we’ve seen some gorgeous modern homes that are muntin-free, and we even suggest removing muntins in some cases to give your home an instantly updated look. But a word to the wise–Make sure you’re ready for the commitment of having large panels of glass around your home. If a stray rock gets launched from your lawnmower onto your window or an amateur backyard baseball player misses his target, you’ll have to replace the entire large sheet of glass rather than just one small glass pane.

Drive down any residential street, and you’ll most likely see muntins on nearly every house, no matter what architecture style the neighborhood leans towards. Of course, you’ll see them the most on traditional windows. However, they also appear on front doors, kitchen cabinets and even garage doors.

The typical muntin pattern is the symmetrical grid. Sometimes glass panes show up as perfect squares, but most commonly they are rectangles. However, on cathedral-style windows, muntins take on a beautiful arched pattern. We’ve also seen some fun imitation muntins on front door windows. 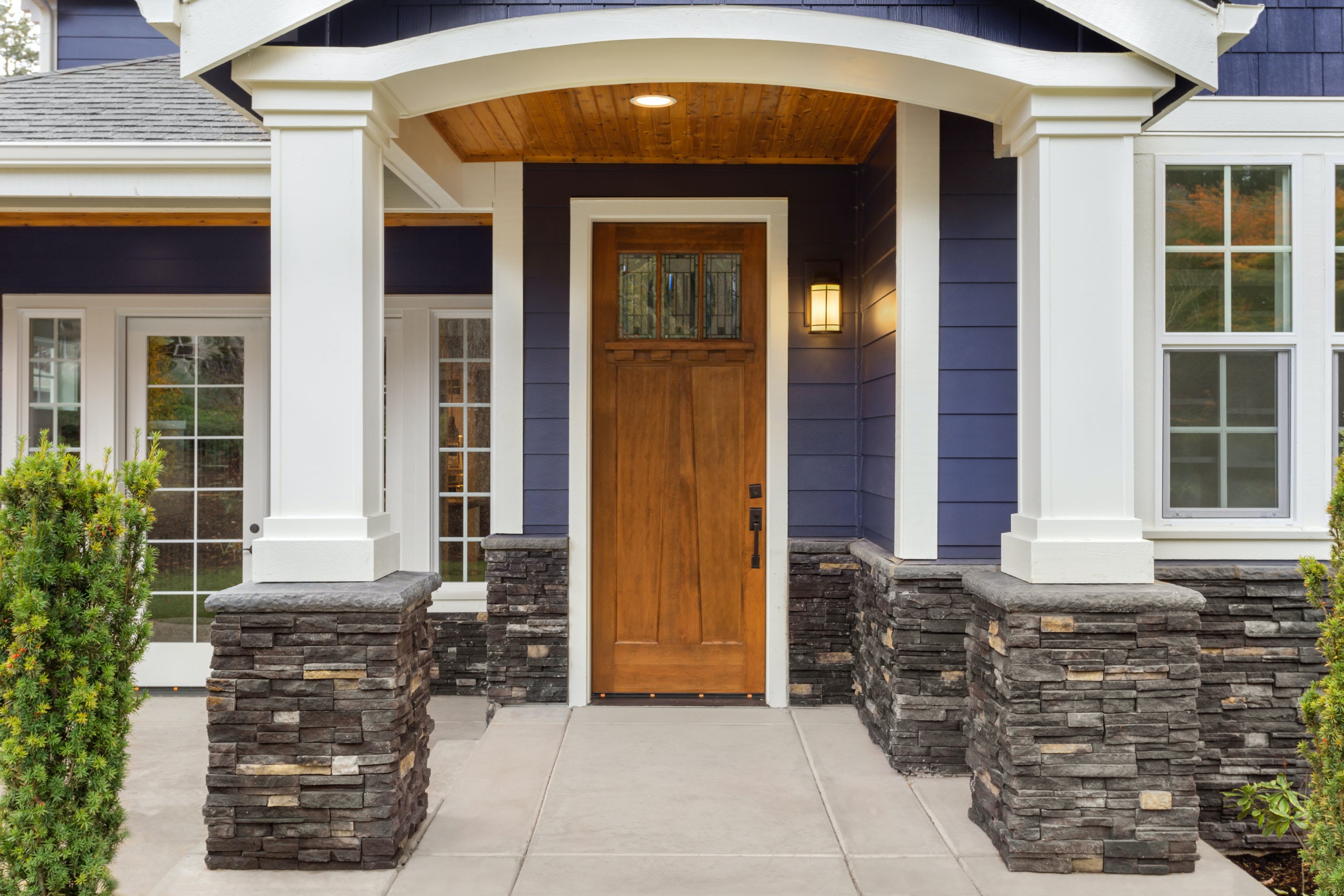 When trying to keep the difference between muntin vs. mullion straight, it all comes down to what they divide. Muntins separate panes of glass, while mullions divide two or more windows or door frames together. They can run both horizontally or vertically.

Mullions serve many purposes. For example, they can divide a stationary and a movable set of windows, so you can easily allow fresh air into your home. You’ll see this separating bar on apartment terrace windows in France and even on country homes in southern America. These elements also add depth to resist wind load, which is especially crucial for hurricane susceptible climates. 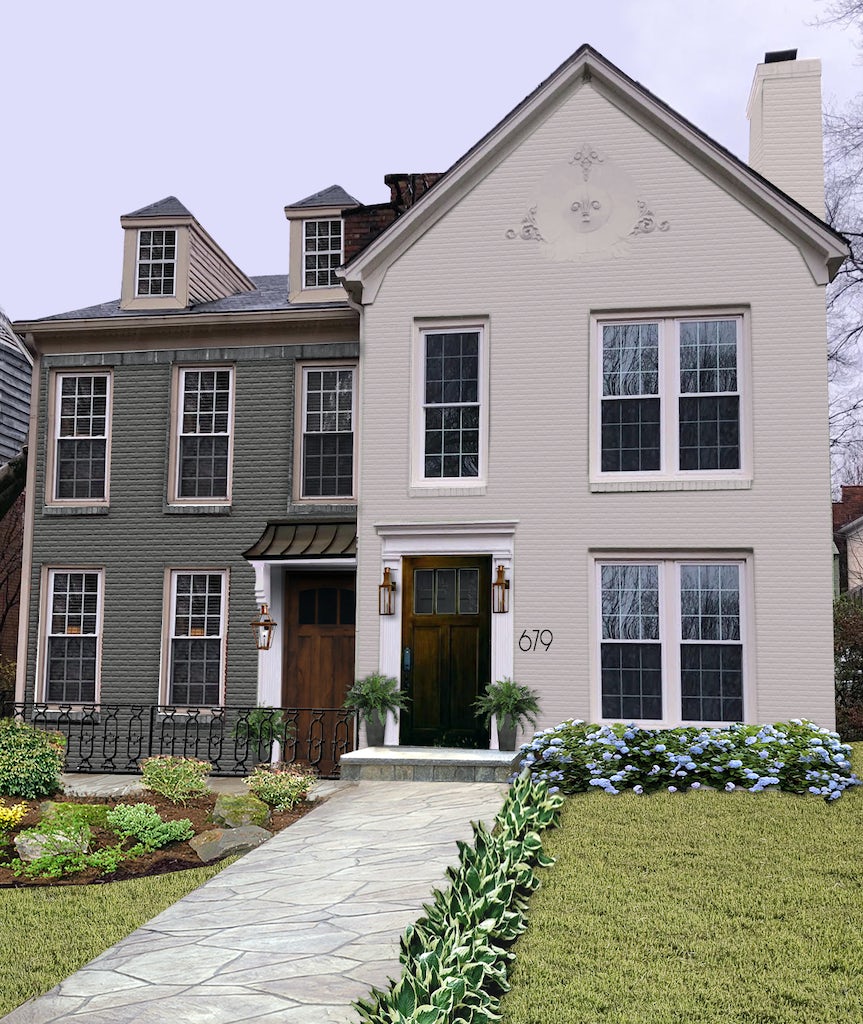 When it comes to applying muntins and mullions to your home, shape, color and material are important. Let’s focus on color first. What color you choose to paint your muntins and mullions can make a huge difference in your exterior redesign project. As a general rule of thumb, you should ensure that your muntin contrasts well with your home’s exterior paint color. However, we do believe monochromatic color schemes have their time and place, and we aren’t afraid of breaking the rules every now and then. On the other end, mullion generally looks best when it matches the rest of the home’s color, but sometimes it also looks good when it matches the window’s frame.

Once you nail down the right color, choosing the right material is easy. Wood is a timeless, go-to material for muntin, while stronger materials like steel are a good option for mullion. Muntin comes in many different shapes, while mullion is generally just a simple, straight line.

You’ll find muntins and mullions on nearly every style of window, from prairie style windows to transom windows. They work well on any window shape, from a circle to a perfect square. Adding these elements is a great way to show your personality through your home’s little details and merge beauty with function.

Bottom line: mullions divide openings and muntins divide glass. Still confused about muntin vs. mullion? We can help ensure that you’re ordering the right item for your DIY project. Contact us for more information on a brick&batten virtual exterior design.