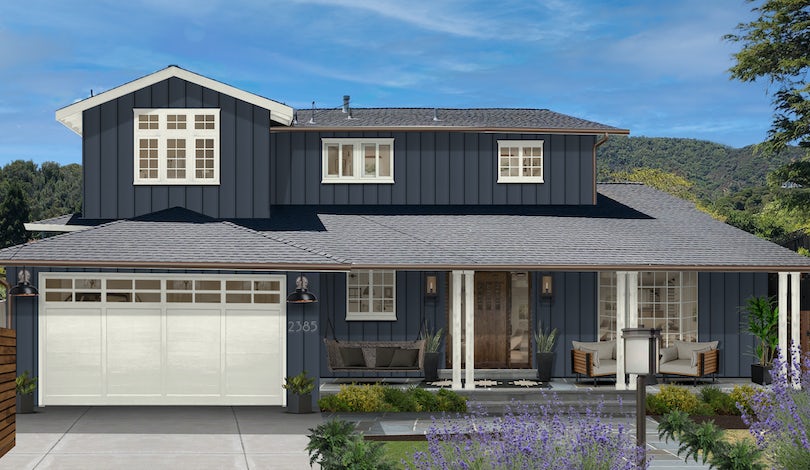 We only use paint colors in our virtual exterior home designs that we’ve seen and used in real-life applications. Our expert designers have done the research and the testing so you don’t have to. 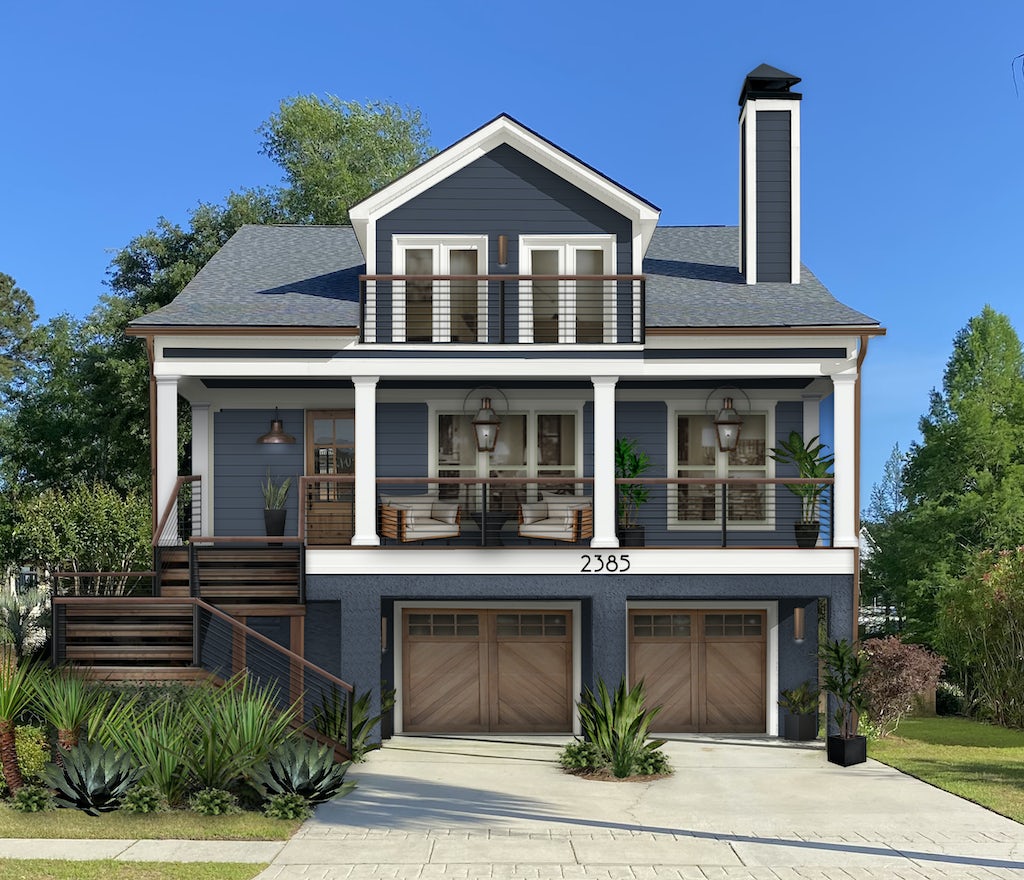 Hale Navy is a cool, deep navy blue. It’s straightforward: No warmth, no tricky undertones. Its LRV is 6.83, meaning it’s unabashedly dark. (Learn all about LRV here.) But it doesn’t read as black, as some other dark blues may, depending on their environment. 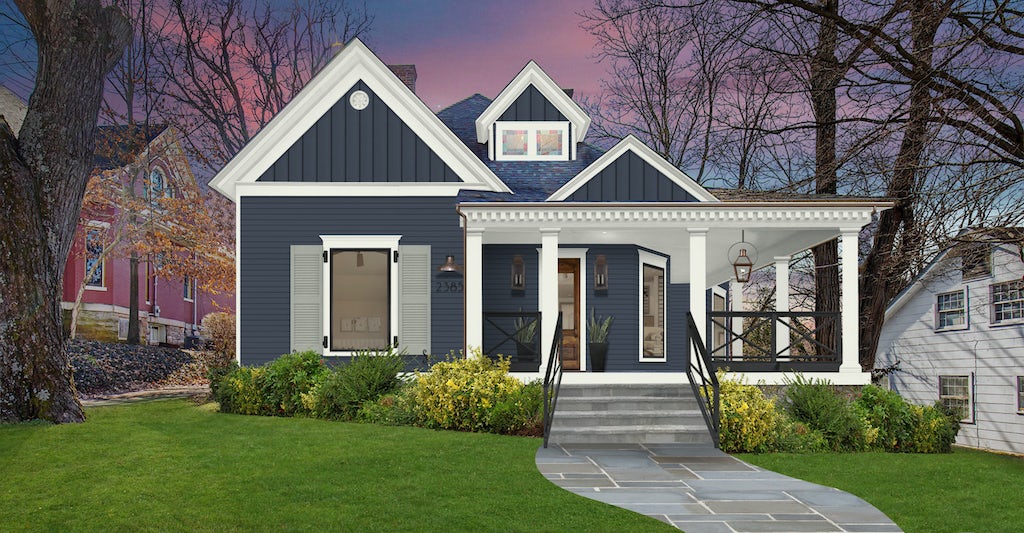 Hale Navy is a stunner on homes in a plethora of architectural styles, from coastal bungalows to historic cottages to transitional craftsman homes. We’ve recommended it for use on all sorts of different surfaces: siding, stucco, brick, shutters, front doors, and more.

Because this navy blue leans classic, we don’t tend to use it as the central color on modern or contemporary homes. 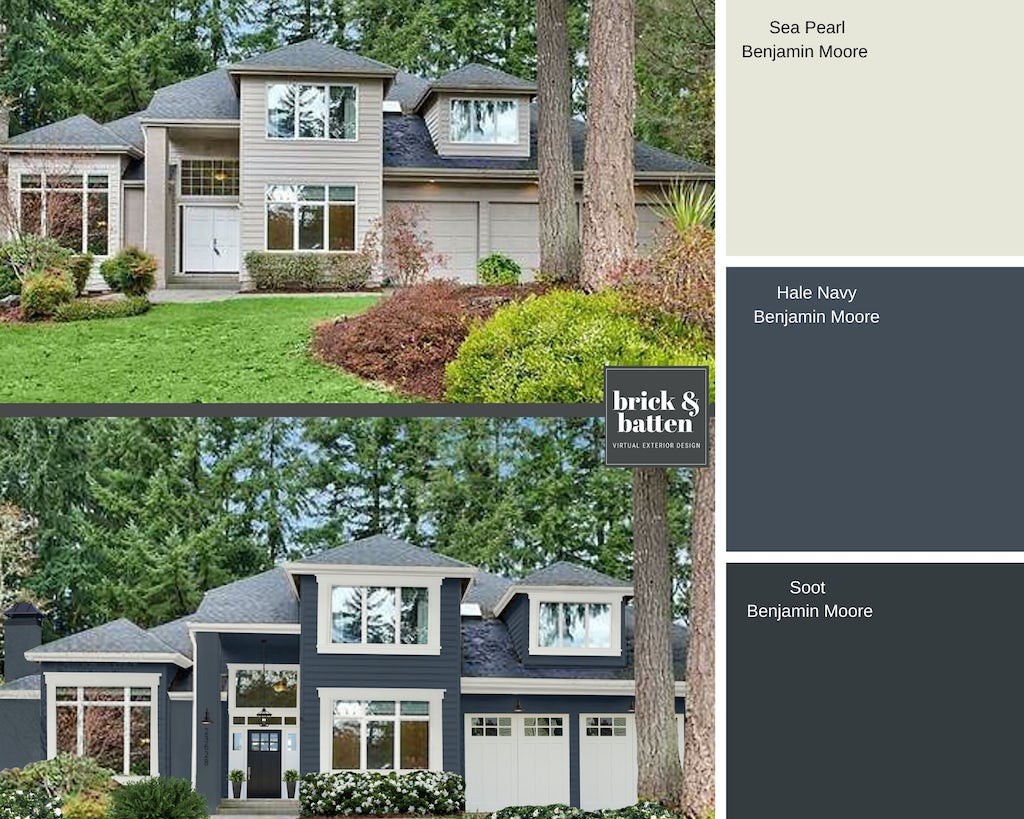 Hale Navy is a team player in home exterior color palettes. It works well with so many different colors — even warm tones!

We love it with trim colors ranging from bright and clean White Dove or Alabaster to the more decidedly off-white Seapearl to the greige Revere Pewter.

Hale Navy also can also be the accent color with one of those off-whites as a base. It looks beautiful on a front door or on shutters.

Finally, this navy is a strong enough blue that it can work with black accents or windows. 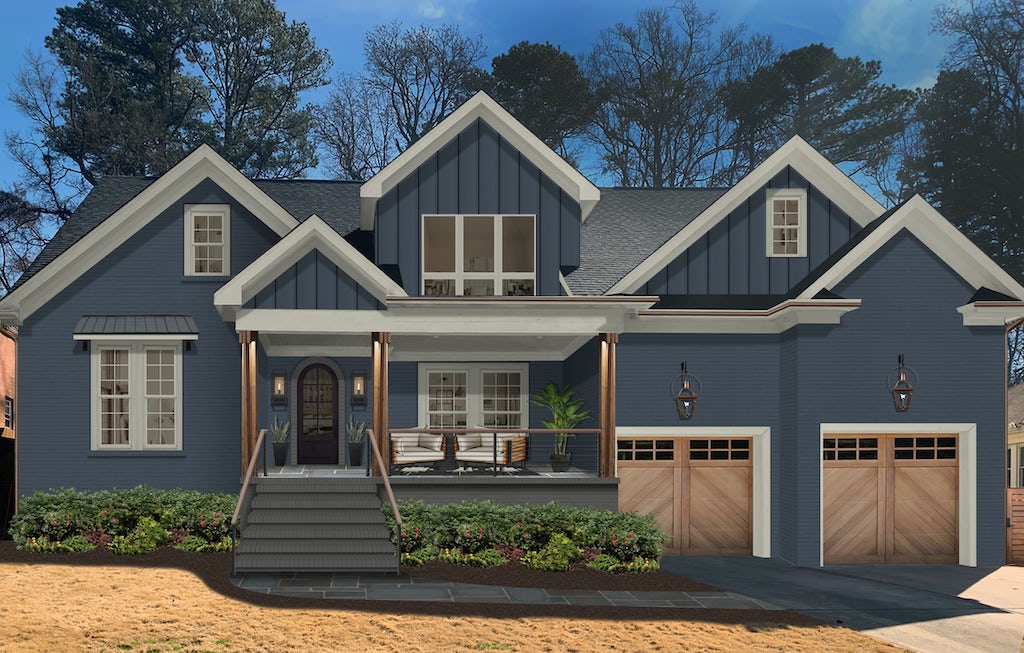 Pros and Cons of Hale Navy

Navy blue can mean different things to different people. Fortunately, there are a ton of navy, dark blue, and off-black paint colors that we love for home exteriors that aren’t Hale Navy. 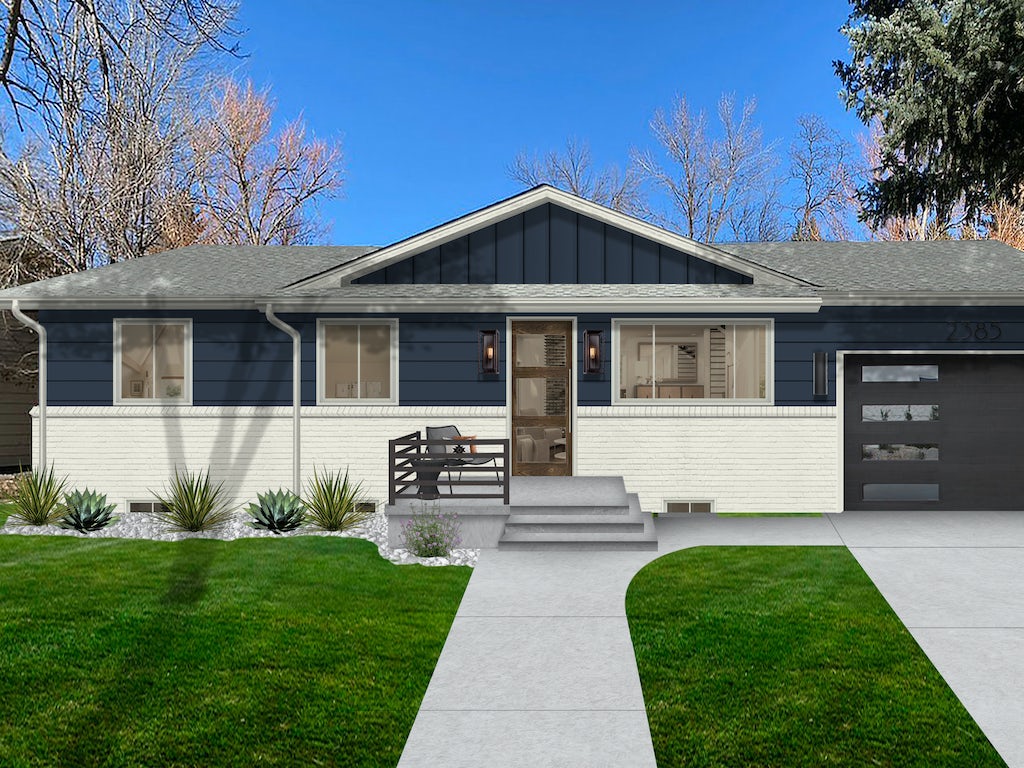 With an LRV of 4, Naval by Sherwin Williams is noticeably darker than Hale Navy. Naval is a striking, saturated paint color with distinctive purple undertones and none of the gray that navy colors can show. In a similar vein to Hale Navy, Naval also pairs well with off-whites like Alabaster, used on the brick in the home design above.

Needlepoint Navy by Sherwin Williams is a much lighter navy than Hale Navy. Its LRV is 13, and it comes off as quite a bit more blue. On the home design above, Needlepoint Navy is used as an accent on the vertical trim and is paired with the even lighter Waterloo. This color made our list of the best Sherwin Williams exterior paint colors of 2021. 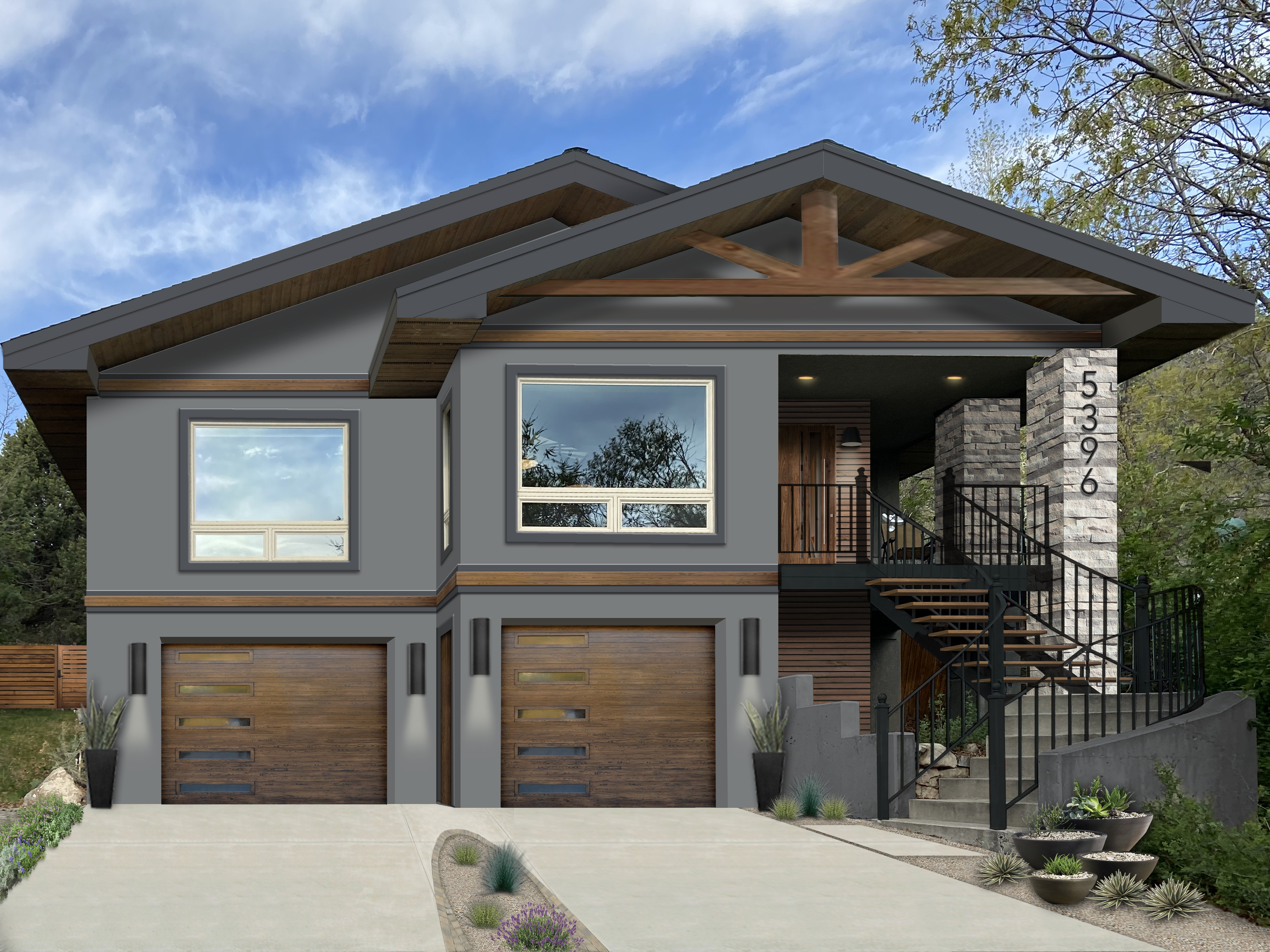 Westcott Navy, used on the trim in the home above paired with Steel Wool on the stucco, is a couple of shades lighter than Hale Navy. It reads much more gray and also has some green undertones.

If you love navy blue and are looking for a James Hardie siding option, we recommend looking into Evening Blue. We love James Hardie siding for its marriage of form and function. This color option looks fantastic with black trim and the gray and taupe blend of Solstice Stone on the home above. 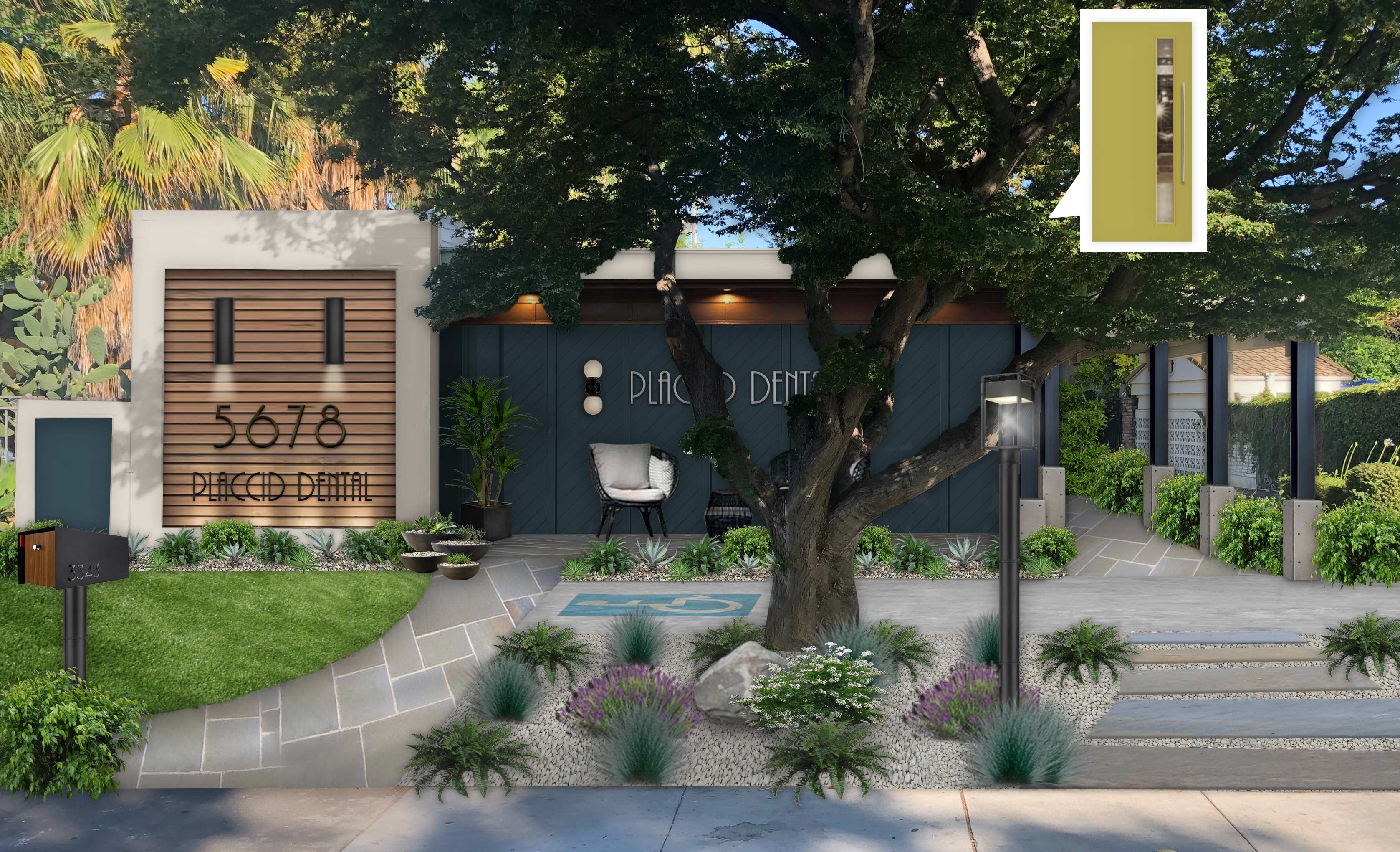 With the same LRV as Naval (4, above), Dark Knight by Sherwin Williams is also darker than Hale Navy. However, Dark Knight is a bit less saturated than Naval. It has stronger green undertones than Hale Navy and doesn’t have any of the purple undertones of Naval. This color also plays nicely with Revere Pewter, as used on the stucco, eaves, and soffit in the commercial exterior design above. 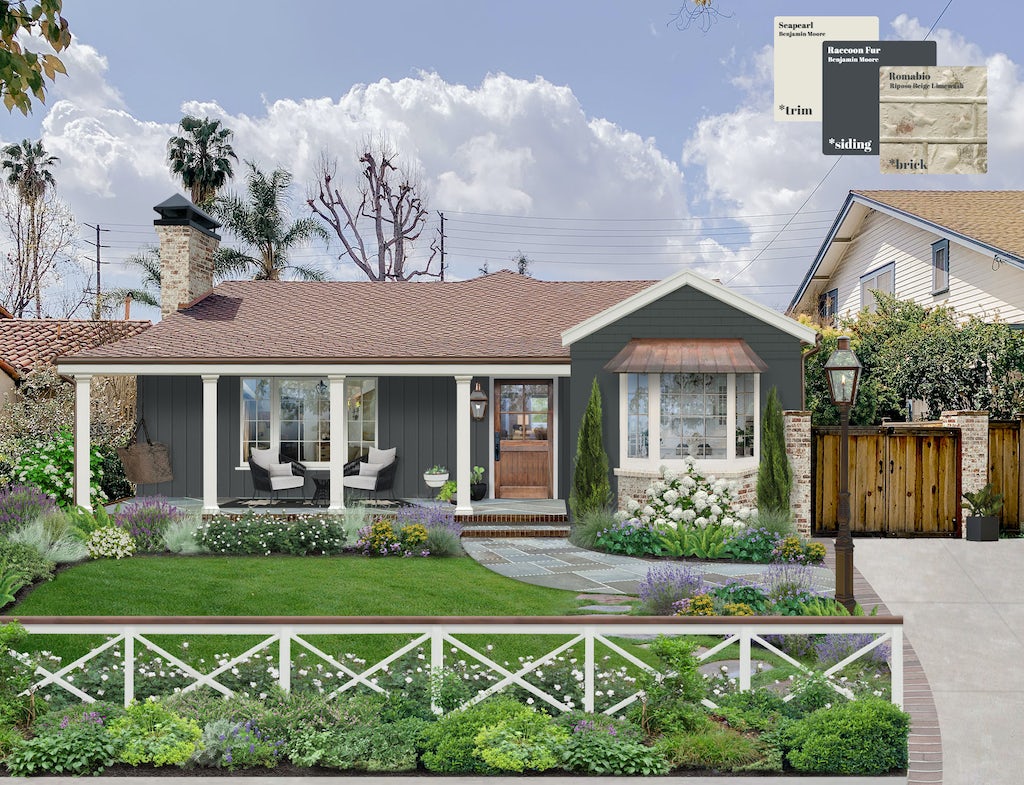 Finally, Benjamin Moore’s Raccoon Fur has a similar LRV to Hale Navy, but comes across as more of a charcoal gray with blue undertones rather than a navy blue. It’s a good option for homeowners interested in a near-black exterior paint color. 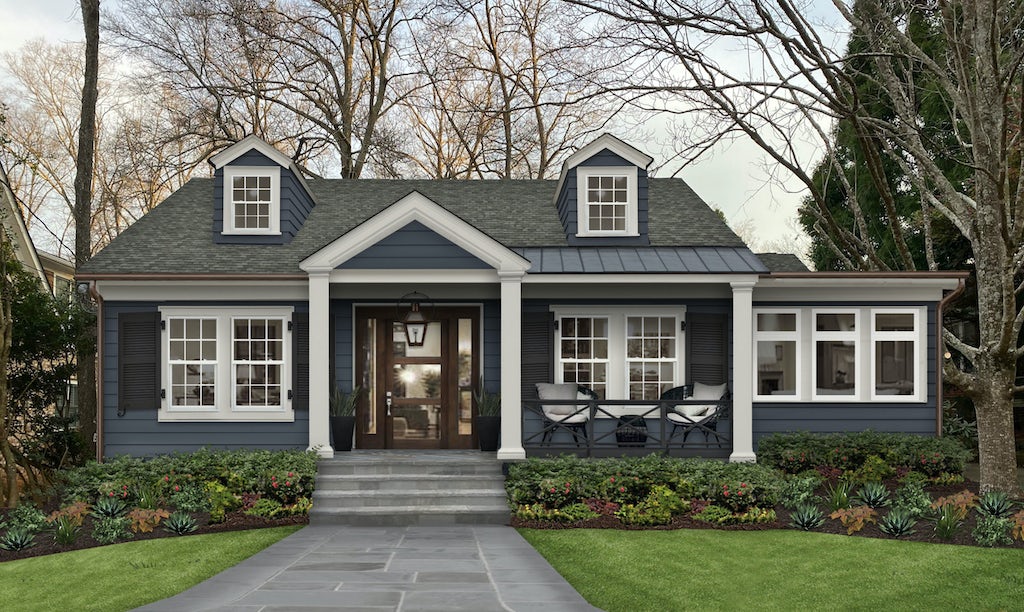 The Bottom Line on Hale Navy

Navy can bring to mind everything from traditional maritime color schemes to elegant evening gowns. Hale Navy by Benjamin Moore is one of the most versatile navy blue exterior paint colors out there, functioning as a deep, saturated neutral in most color palettes. We love this color and think it will be a mainstay for years to come.

Still not ready to commit to a new exterior paint color for your home? Want to see how it will look first? That’s why we created our virtual exterior design service. Want to see your home in Hale Navy? Or Hale Navy alongside Raccoon Fur, to help you choose between the two? We can work with those directives. Fill out our quick questionnaire in as much detail as you’d like, and our expert designers will get started on mocking up the new exterior home of your dreams right away.