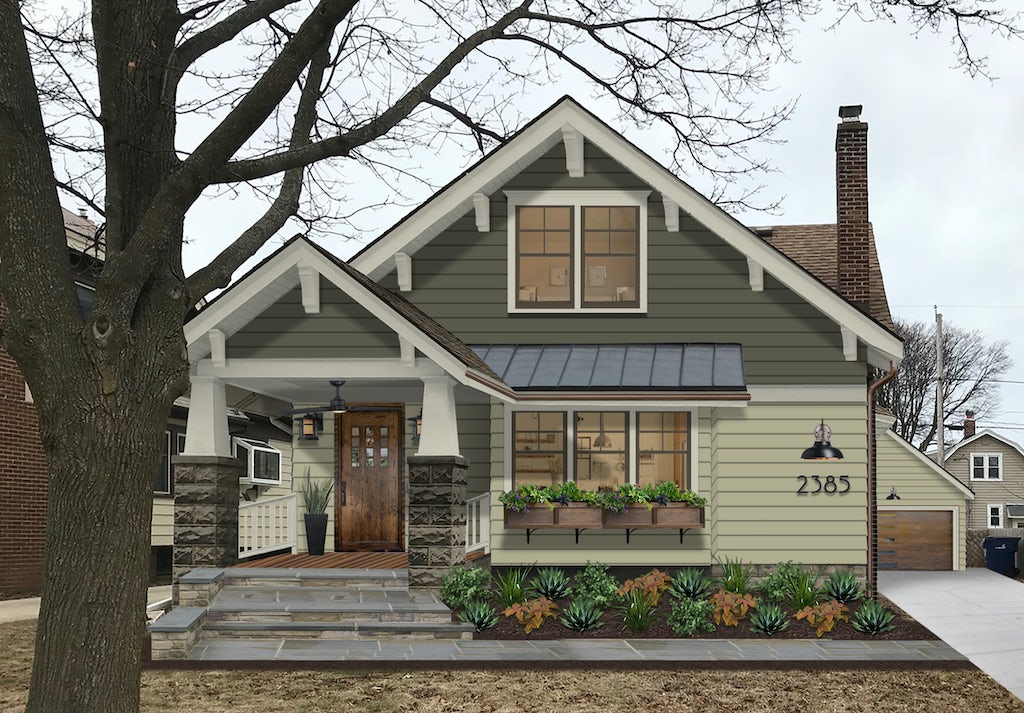 Brick&batten has had the privilege of designing many a bungalow style house, common in the midwestern and western United States. We’ve put together a list of our favorites, in different locations and with design ideas to inspire you.

If you have a bungalow style home and are looking for new paint color ideas or modern exterior updates, our designers can help you achieve the curb appeal of your dreams. Get started with our virtual exterior design services today!

What is a bungalow style house?

A bungalow style house is either one story or has a second story built into a sloped roof, typically with dormer windows. This style of home started appearing in the United States in the early 1900s. Bungalows are most commonly associated, in America, with the Arts and Crafts design era. However, other homes, like beach cottages, are also considered bungalows. Due to their small size, bungalow houses were originally built as vacation or second homes, but the approachable style became popular during the midwest housing boom through the 1930s.

Bungalows Around the World

The term bungalow is derived from the Hindi word bangla, which means ‘belonging to Bengal’ and refers to a type of cottage built for early European settlers in Bengal. Around the world, bungalow style homes are popular but often carry different meanings. In Singapore, Malaysia, and South Africa, for example, bungalow is a term used interchangeably with ‘single-family home.’ These homes are often large and owned by wealthy families. By contrast, in the United States, much of Europe, and Australia, bungalow refers to a particular style of home and is usually much smaller.

This adorable bungalow received an upgrade in James Hardie siding painted white with black trim. The extended wide porch laid with flagstone makes the home feel more inviting and open. The combination of materials adds to the bungalow’s natural feel.

Many bungalows have a second story or a half story or loft, but it’s rare to have a second-story porch. This unique detail gives the home design above visual interest while adding some outdoor living space. The semi-enclosed porch on the main floor is also a bungalow-specific characteristic.

This bungalow style home has a sloped roof typical of the era. It has a little bit larger footprint though, like a ranch. Framing the porch in natural wood columns and beams helps highlight the roof as a design feature.

This bungalow house has a gambrel-style roof, which is more commonly seen in the northeastern United States. The dormer windows and wide veranda are characteristic of this style of home. Bungalow style homes were often built with materials available at the time, so natural features like wood beams and stone are common. Using these materials in updating a bungalow house is a great way to bring in modern touches that still honor the home’s architectural roots.

Some California and airplane-style bungalows often have a second story only above the garage. This floor was traditionally one open room and used as a summer sleeping area with windows for air circulation.

#6 // Side View of a Bungalow Style House

This is a side-view of a bungalow home with a cozy side porch and back sunroom. Bungalows with large porches might be partially or fully closed. They extend the square footage of the home and create more usable living space, depending on the season.

The Milwaukee bungalow home features a gable perpendicular to the street, on the side of the house (as pictured above). In a Chicago bungalow, on the other hand, the gable is facing the street. The home is also narrow, which is characteristic of midwestern bungalows, and features a large open porch.

This small bungalow with a detached garage is more characteristic of the earlier style. It did not include an upper floor or extra square footage. A home with this small footprint will have to use its space creatively — think built-ins, shelves, and compact closets. Design with a lot of function.

Cape Cod homes have many overlapping characteristics, like sloped roofs and window dormers. However, bungalows differ in their use of natural, locally made materials and a low-profile chimney.

This coastal bungalow gives off a beachy vibe with its wide-open porch. The raised basement has windows for extra natural lighting. This is a feature found in later bungalows for a more open and airy feel.

Newer-built modern homes in the bungalow style are often much larger than their traditional counterparts. With larger square footage, these ultimate bungalows combine the aesthetic style of a bungalow home with the modern desire for wide open space.

This bungalow home has a curved gable roof over the porch, creating unique visual interest. This home gives off more of a Cape Cod vibe with its use of white building materials, but adding a stone porch and wood shutters brings in the cozy, earthy bungalow feel.

Raised bungalow homes, sometimes called split-levels, are a unique style that has a basement. This particular home also has a lower-level garage. Many bungalow style houses in midwestern cities are narrow to fit the lots and do not have space for a side or detached garage.

As we’ve alluded to, there are different home styles like Cape Cod or Craftsman that have similar or overlapping features to the bungalow. But only bungalows feature a sloped roof, a combination of materials, single story (or small second story), and a small footprint.

Historic bungalow style houses can work for the modern lifestyle

Whether out of necessity or desire, many Americans are opting for smaller, traditional bungalow style houses with some updated modern features. The renewed interest in these homes, especially in midwest cities and towns, offers creative design options and affordability for new homeowners. They’re also popular with empty-nesters looking to downsize and advocates of the small living or tiny house trend.

If you’re ready to dive into an exterior renovation of your bungalow home, but don’t know exactly where to start, we can help! Learn more about how our team of designers can help you build the home of your dreams, or get started today.