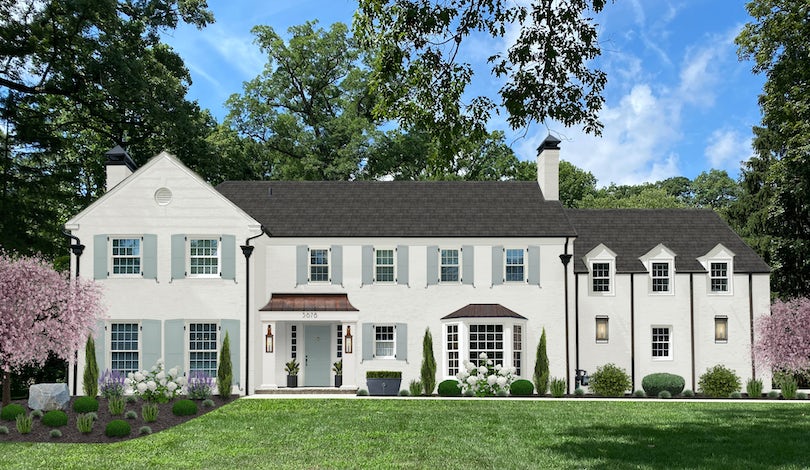 Shutters are a pretty hot topic around here at brick&batten. Just to sum it up, we are big fans of shutters when they are done right. But in all honesty, some homes look better without shutters, and a poor shutter choice can make a home look like an eye sore. While getting personalized design advice from a professional exterior designer is usually the best way to go, there are a few shutter styles that work on (almost) any home.

But before we jump right in, we suggest you start by reading our guide on everything from shutter size to hardware. Then, meet us back here!

To shutter or not to shutter? It’s a difficult choice that can be made much easier when you have a way to visualize what it would look like. At brick&batten, we provide virtual exterior design services. Using a photo of your home, we will create a custom design rendering just for you, and provide you with a resource list to help you get started. We’d love to help you unlock your home’s full potential!

7 Shutter Styles That Work on (Almost) Any Home

Raised panel shutters with hardware look good on so many different types of homes. Although these types of shutters are a natural fit on colonial and craftsman homes, they can also look great on simple homes with modern accents, like in the rendering above. We love suggesting raised panel shutters from Sunbelt Shutters to our clients. They are available in wood or composite, and you can even pick the type of paneling design too.

We’ve seriously fallen for the S shutter dogs on these shutters. Even if you don’t plan on using your shutters, it’s extremely important that you add hardware to them. Otherwise, your shutters will look fake, no thanks!

Louvered shutters are perhaps the most traditional shutter type, so they especially look great on historic homes. One reason for this is because louvered shutters were actually quite useful in the days before AC. Homeowners could still let in a breeze without letting pests in thanks to the slats.

#3 Board and Batten Shutters

Board and batten shutters give us quintessential farmhouse and cottage vibes. With the rise of the cottagecore trend (don’t worry, we had to Google that too) and the farmhouse trend still reigning strong, we’re seeing more and more homes with these shutters. We especially love natural wood board and batten shutters, so we usually suggest working with a shutter company, like Sunbelt Shutters, that offers multiple types of wood. Southern Yellow Pine, Western Red Cedar, California Redwood, Rough Sawn Cedar, or African Mahogany–Each wood species has such a unique look! 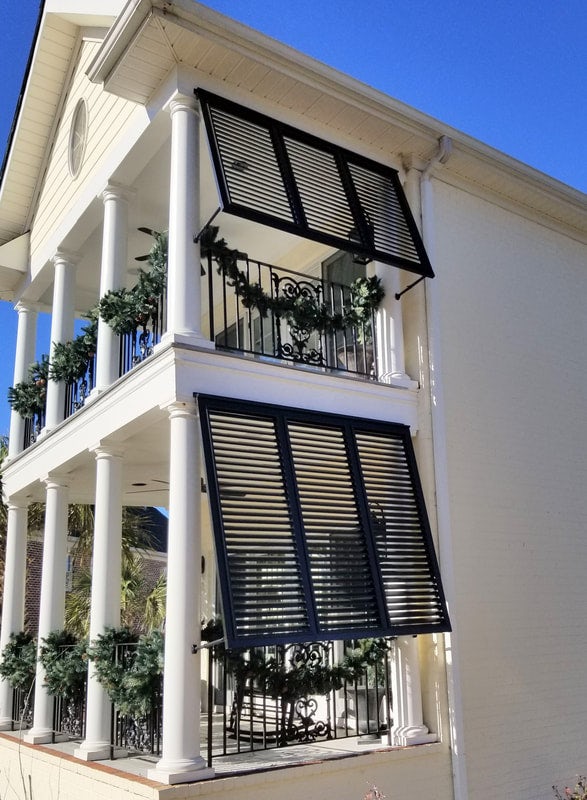 Bahama shutters look wonderful on homes with large windows. We see these shutters often in hurricane-prone areas. Since they can cover large windows, they can protect them from flying debris.

A little bonus tip with Bahama louvered shutters: You can actually also add them to a porch to create a screened-in effect! Unlike the other shutter styles mentioned above, arched shutters fit a more specific type of architectural style. Arched shutters absolutely only work on arched windows. We feel that rule of thumb should go without saying, but we’ve actually seen some arched shutters placed on rectangular windows, and the results are a firm NO. We’ve placed a photo for your reference below!

That is a FIRM NO!

In general, clients are asking us to square up arched windows, which means we are seeing far less arched shutters. We believe arched windows are already a unique architectural element in themselves. They don’t need shutters to make them stand out.

Can you actually pull off shutters on only one side of the window? ABSOLUTELY! There’s no rule that shutters need to frame both sides of your window. If there isn’t room for a shutter or your architecture lends itself to a lone shutter, then by all means, do it! Use a bi-fold shutter to close over both windows. Be the trend setter and feel confident that this shutter trend is a DO.

Shaker shutters are very similar to raised panel shutters. Upon first glance, they often get mistaken for one another. Shaker shutters have a flat body rather than a raised body. They are a slightly simplified version of raised panels, and they give off a more refined and modern look as a result. The flat panel shutter has become a favorite of our brick&batten design team!

A Few Pro Tips to Remember About Shutters

In conclusion, shutters are a pretty hot topic around here at brick&batten. On the right house and designed  correctly, shutters are a beautiful way to add interest, texture, and color  to your home’s exterior. Just to sum it up, we are big fans of shutters when they are done right. Think size, hardware, and style… and for questions our design team can show you the correct shutter for your home’s exterior.

If you’ve been staring and staring at your home, wondering what is missing, it just might be some shutters. While it’s true that not every home needs shutters, they can function as a useful design element that helps fill blank space. However, by investing time and money into painting and attaching shutters without visualizing it first, you run the risk of wasting money. Your best bet is to hire an exterior home design service. Let’s unlock your home’s full potential together!