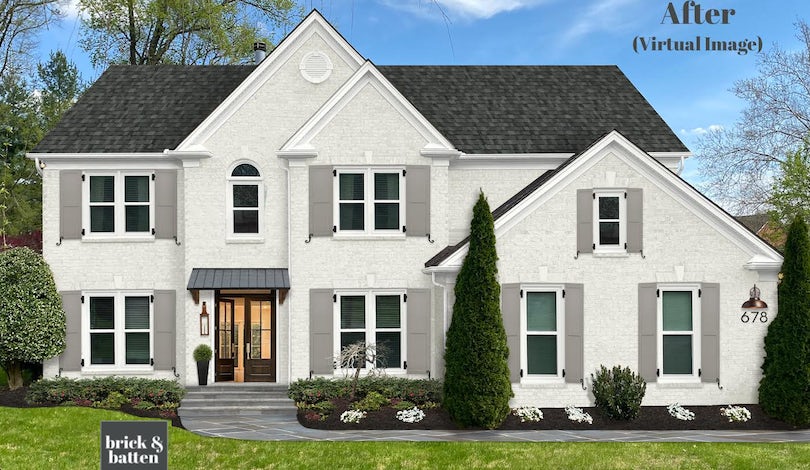 Are you thinking shutters? Be sure you have everything you need to know about shutters before making a decision that could make or break your home’s appearance from the street.  Generally, I think people can look at their home (or neighbor’s home) and know something isn’t quite right.  You may not know what it is, but there’s something off about the whole look. Many times, if the house has shutters, this is the problem! When not done correctly shutters stick out like a sore thumb.

Contrary to popular belief, not every window needs shutters and not every architectural style should even consider shutters. That said, it’s time to really dive into when shutters work and when they don’t, what type of shutters work on your home’s architecture, and common mistakes people make when they decide to hang shutters.

Next time you’re out, drive through some neighborhoods in your area.  Find the spot where the builder decided to put on shutters… What do you notice?

Originally, shutters were made to keep out weather elements, noises, unexpected visitors, and animals. Before screens, people actually would open and close their shutters to serve a purpose.  That said, shutter size is the most important thing to consider.  Be thinking, what is the function of the shutter? If it’s purely decorative, skip it or find a shutter that fits.  Ultimately, that means that shutters aren’t ideal on picture windows, bay windows, double width windows. It just doesn’t make sense to mount shutters in these areas.

When looking at your windows, you may think they are all the same size; however, that’s just not the case. There are slight variations in each window. That said, it’s important to measure each window separately and not just assume they are all the same size. Sunbelt Shutters has perfected the art of measuring and accurate measurements are key to the final look or checkout this Timberlane cheat sheet for more help.

Every home has a different style. Some are blended, like the modern farmhouse and others are easy to identify like the colonial. That said, there are different shutter styles for different types of architecture.

A louvered shutter is made with overlapping horizontal slats, equal distance apart, put in a frame. Driving around it is the shutter I see most often. Unfortunately, most of the time they are screwed into house siding and not hung correctly.  Louvered shutters used to serve as the primary window covering for folks in hotter environments. Because the shutter is slatted, it would allow fresh air into the house.

The traditional panel shutter is hard to beat! There are so many different types: raised panel, flat panel, trim, no trim, corded trim, etc. The combinations are endless! Panel shutters have solid pieces as opposed to horizontal slats.  They were originally used in New England where they were needed for protection from environmental elements, such as snow and rain.The flat panel shutter has become a brick and batten favorite!

Bahama Shutters are also called Bermuda Shutters. Exactly like the sound, Bahama shutters are often found in warmer climates because they hinge open at the top at a 45 degree angle, almost like a sun visor for your window.  Often seen around water, Bahama shutters are easy to pull down before rain erupts. These shutters look beautiful on beach houses and those in warm climates.

Board and Batten Shutters. If you need help with home exterior design, our design experts would love to partner with you on a project for your home. Our specialists are trained in color, doors, lighting, awnings, shutters, etc. Check out these before and after images and get inspired!

Overall, your house is a reflection of you. It should be beautiful and functional! Are you thinking shutters? Correct shutters can make or break your home’s appearance from the street.  Be sure you have everything you need to know about shutters before making a decision on what’s best for you and your home’s architectural style.

Reach out to brick&batten for your home exterior design, today!