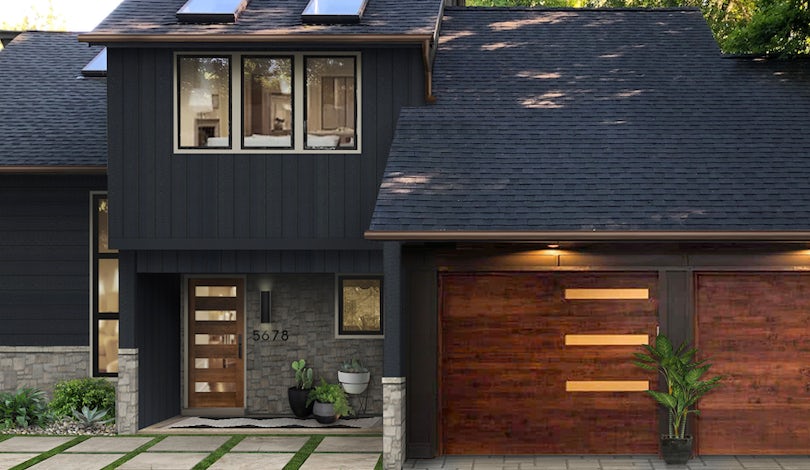 Who’s in the mood for some architectural eye candy? Personally, we could stare at photos of beautiful homes all day. Here are some stunning pictures of mid-century modern home exteriors sure to inspire!

Do you have a mid-century modern home that needs some sprucing up? Or perhaps your mid-century home just needs a little modern added to it? Hiring an exterior designer like brick&batten is the way to go. We offer custom virtual home exterior design services. Using a photo of your home and information about your project goals, we will design a realistic rendering that brings out your home’s full potential.

If you are surrounded by nature, go for a more natural look with darker colors and wood tones. It seats the property just perfectly in it’s surroundings while maintaining a modern look.

Not only does this home’s exterior look like an actual work of art, but just imagine how much gorgeous natural light pours in! Architect Matthew Hufft designed this house, and we love how he mixed wood, stone, and steel. You won’t find a drop of paint on this home’s exterior, just raw materials.

#3 A Before & After That Proves Color is King

If your home isn’t necessarily classified as mid-century modern, consider looking at it in a new light. This before and after rendering shows what a difference dark paint can make. Classy gray paint and black garage doors can really modernize a home.

#4 A Home With a Window Glow Up

Many older mid-century homes majorly lack natural light. So, one way to modernize this style is to add windows. Of course, this process is an investment, but the increase in property value could make it well worth it!

#5 This Back Exterior Was Not an Afterthought

At brick&batten, we also offer exterior design services for a home’s back exterior. We love this example of a mid-century modern backyard. The awning serves as a multi-level patio that is perfect for entertaining all summer long.

Although the light and airy paint trend has successfully taken over modern farmhouses and cute cottages alike, it hasn’t quite claimed mid-century modern home exteriors yet. We love these examples showing how white paint can enhance this architectural style. Painting a mid-century home white can make it stand out in the best way possible.

#7 Check Out This Home’s Patio Overhang!

Although this overhang is designed for the back patio, we’d love to see what it would look like over a front porch. This much beauty should be shared with the world! And mid-century modern homes often embrace minimalism. For example, straight columns rather than traditional columns support this overhang. In the case of mid-century modern, less is definitely more!

#8 Brick Can Indeed Work on a Mid-Century Modern Home

While mid-century was having its heyday in the 1960s, so were natural elements on home design such as brick and stone. For this reason, many original mid-century homes feature these elements. However, we’re here to show you a different twist to updating mid-mod building materials. The two-tone paint updates the look and adds interest to the house, keeping in line with the original architecture. We love it when our clients are open to adding a pop of color on their mid-century modern home, especially on the front door. The lime green or beautiful orange door on this home can make every day feel a bit more like spring.

#10 We’re Swooning Over The Roofline

Rafter tails are a tried and true sign that you may be dealing with mid-century architecture. Paired with the natural stone and mountain backdrop you can’t go wrong! Check out the zig-zag roofline on the stunner above. It’s a toss up… some call it art deco and others say mid-century modern. Either way, this home definitely stands out due to the interesting roofline. 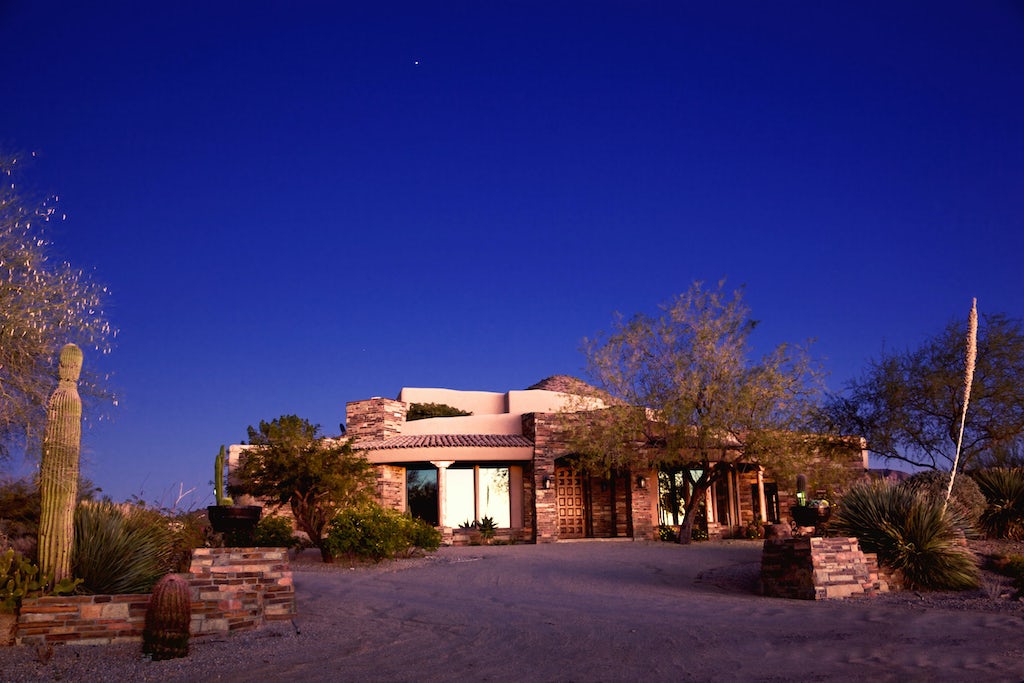 Whisk away to southern California and stay at this dreamy Airbnb that is pretty much all windows. Be sure to take notes when you’re there so you can try to emulate the look on your own home. This house is even off the grid, so you’ll have to Instagram it later. 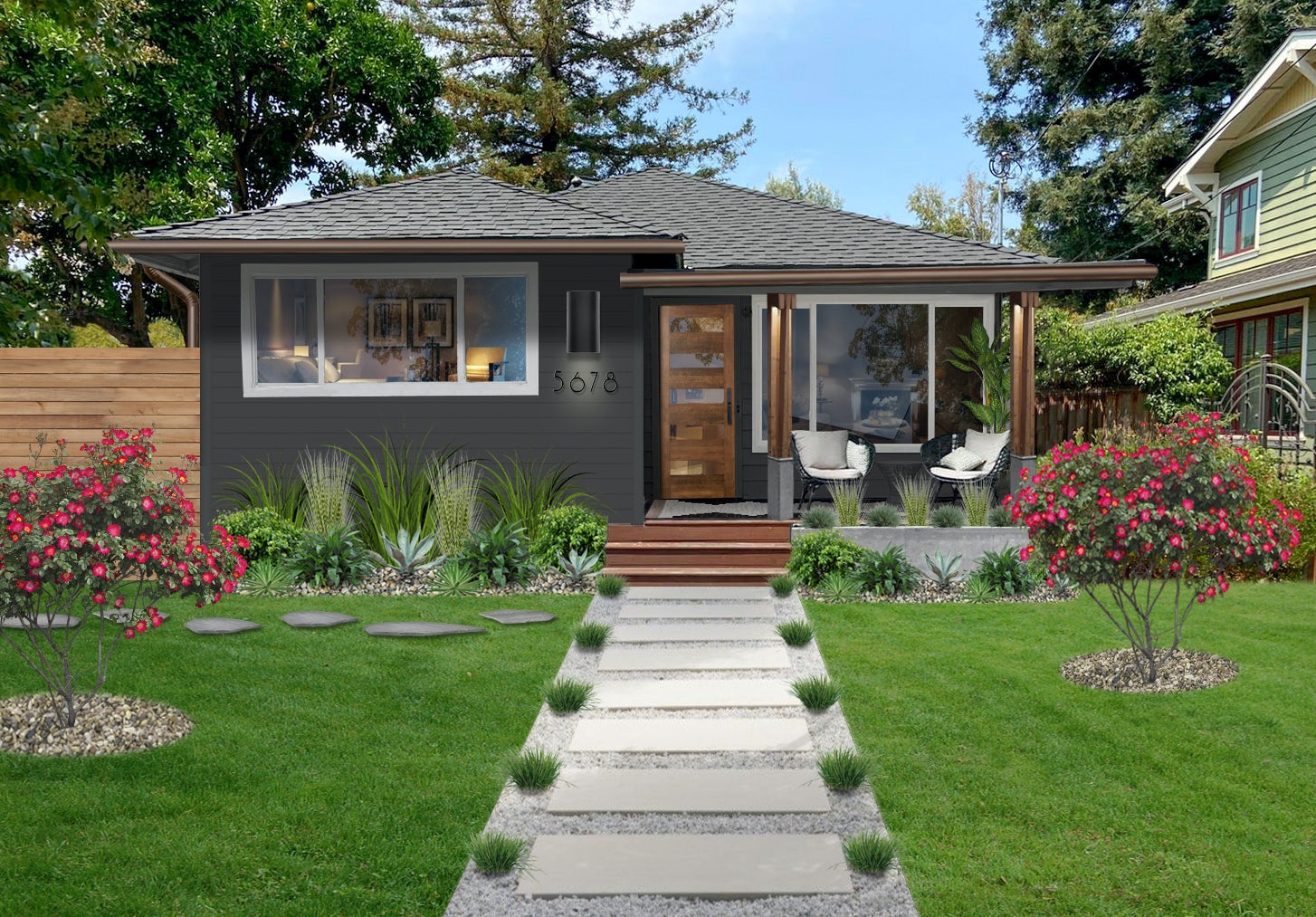 #12 A Quaint, Cute Take On This Style 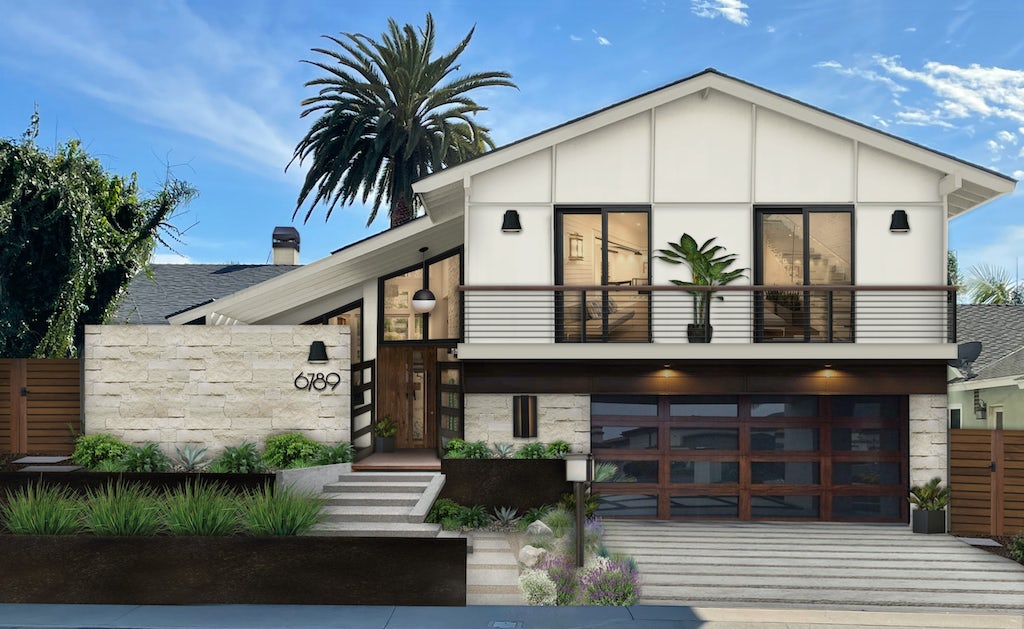 We obviously couldn’t curate a list of stunning mid-century modern home exteriors without including one of our favorite designs. This home encapsulates so many interesting features while maintaining a sense of simplicity and beauty. 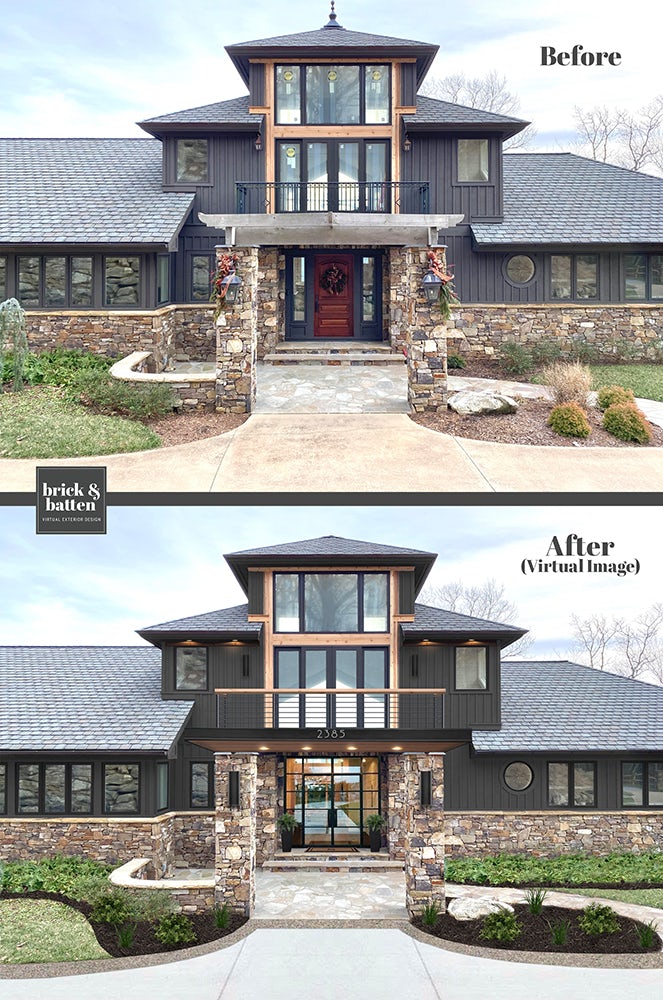 #14 Asian Infused Modern is a Thing

Mid-century modern homes are quintessentially American, but that doesn’t mean you can’t find them infused with an Asian touch. Check out the tiered roofline to get inspired.

#15 This One Merges Traditional Ranch With Mid-Century

We love this before and after example because it proves that you don’t need a home that is truly classified as mid-century to get a similar look. The after photo follows that classic modern curb appeal formula: Dark paint + natural wood + metal accents. And by adding the right door, this home can almost pass as mid-century modern.

#16 This One is Just Pleasing to Look At!

Some mid-century modern homes evoke a calming feeling when you look at them, and this is one of those for us. Although this home doesn’t display symmetry, it really works. We credit it to the unique architecture that centers your attention on the entryway and creates visual balance. 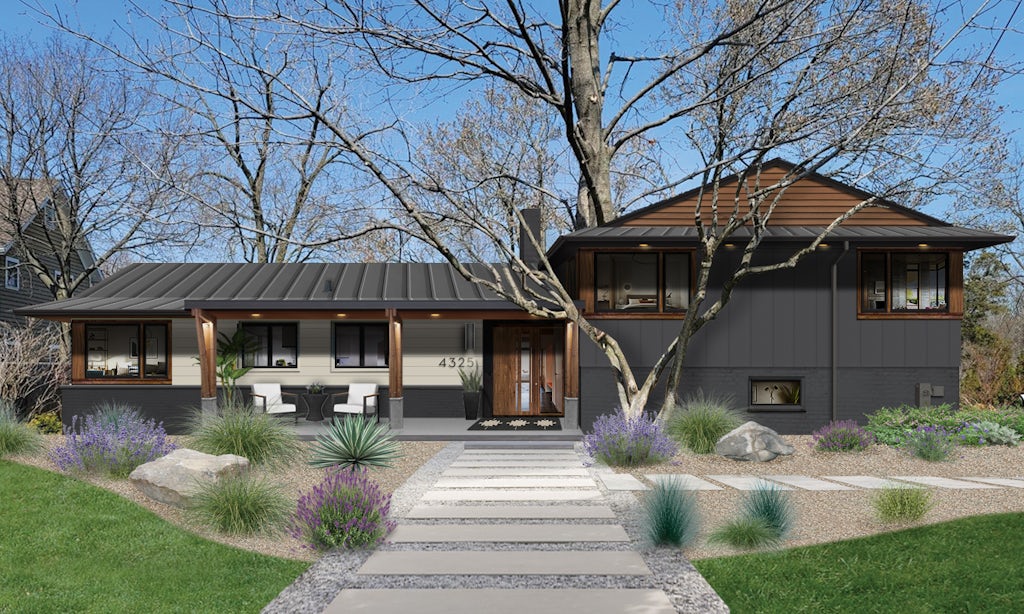 Just look at that sleek roof! A home with a classic slant-meets-slant roof is a coveted treasure among mid-century modern lovers. Of course, some mid-century modern homes are a little window-heavy. For this reason, we love how the privacy wood fence was both a functional and aesthetic choice.

Add a few comfortable chairs around the pool and this mid-century modern turns into an outdoor oasis visible from the home’s living space.