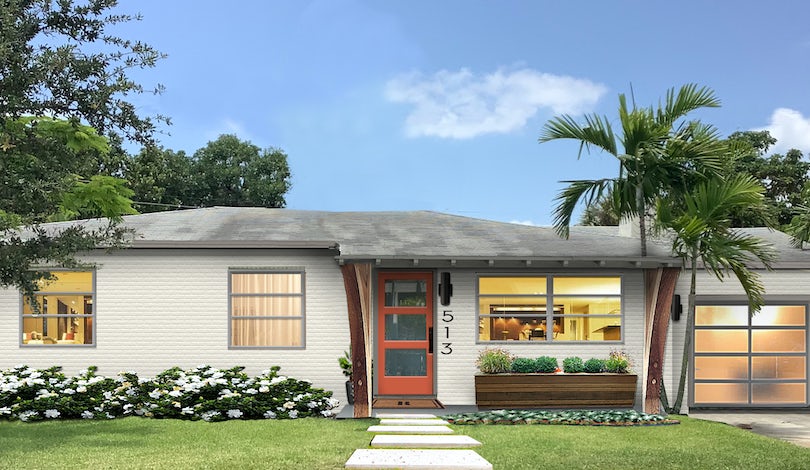 Something so inherently cool and sexy about Midcentury Modern architecture.  They feel effortless in their quest for allowing nature and light to fill their spaces.  A kind of “I woke up like this” attitude…only they really did.  The architecture boasts clean, simple lines and strategically placed windows that allow the natural elements to cascade in.  Outdoor living flows from the wall to wall sliders as if there were no barrier…the ultimate outdoor living space.

While I didn’t grow up in a Midcentury Modern, I can see now how many elements my parents built into mid 70’s two story.  We, too, had wall to wall sliders and a shape that allowed multiple rooms to open to a massive patio with a fire pit (long before they were this cool).  We had wood paneling in our basement and beams across our vaulted, living room ceiling.  BEAMS!  No one else in the neighborhood had those.  They were remnants of a bygone era…and they were awesome.  We also had the vintage record player and built in bar…come to think of it, we lived in the Barbie Dream House.  My sister and I had no idea…we do now.  My mother had a wall of plants on a staggered, floating, wood wall shelf.  In hindsight, it looked a lot like the West Elm you know today.  Effortlessly cool.

We see elements of modernism in almost all new builds today…especially the contemporaries popping up all over Atlanta with their windows and clean lines.  Some people confuse these styles as the same…but they aren’t.  Modern refers to a time period from from the late 1920’s, early 30s that emerged and developed throughout the following decades.  Contemporary refers to “now”.  When you hear someone refer to a “contemporary” house, it is stylistically now, although can share stylistically with the Modernism movement we know from the earlier days.

Midcentury Modern is not just architecture, it is a movement in all things.  Interior design retailers have also caught on with stores like West Elm and Room&Board…the list goes on.  Heres’ why…

These are just a few reasons why Midcentury Moderns are fetching top dollar in the market with no sign of slowing down!  We have seen this trend in our own company, brick&batten.  We are getting more and more design requests to update these GEMS with clients looking to restore their exterior beauty without structurally changing anything…well played midcentury modern, well played.